Which features does a modern PACS workstation need? 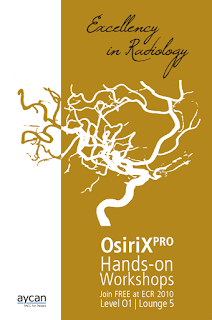 At ECR 2010 we will provide 4 days of OsiriX Workshops in collaboration with the European Society of Radiology (ESR). The courses will be hands-on with Apple Macintosh computers.

There will be 4 sessions per day addressing basic and advanced OsiriX topics.


Download the agenda and further information as a PDF.

b) on ECR 2010 at a special registration counter (estimated on Level O1).

Please note that empirically the Workshops are booked up beforehand.


About OsiriXPRO
Medical images present a steadily growing challenge. In these Hands-on Workshops, we introduce you to the latest state in medical image postprocessing.The attendees can immediately follow the demonstrated contents on Apple Macintosh workstations
at hand. The software in use is OsiriXPRO – the CE-labeled and FDA - cleared version of OsiriX. OsiriX is an excellent Open Source Software which meets this challenge and was decorated with multiple international awards.

About aycan
aycan Digitalsysteme GmbH is a PACS vendor and system provider in the medical engineering branch with long lasting experience and well-founded know-how –especially in the area of radiology, PACS, DICOM and postprocessing. More than 1,000 radiologists are using our solutions and services. Visit http://www.aycan.com to find out more. You can also visit our booth at Level O1 / Gallery at ECR 2010. 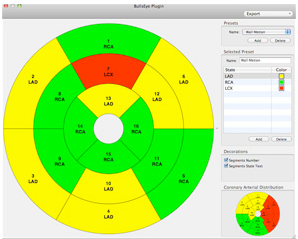 There is a new OsiriX plugin available, called BullsEye.

The BullsEye plugin shows a BullsEye vectorial image. This image can be manually edited, and saved as PDF or DICOM file.

It is available as a download via the OsiriX plugins manager.

aycan will be present at the RSNA 2009. We are maintaining a "Meet the expert" corner for OsiriX users. Our Experts will be available for your questions at our booth #8903 North Building.

You can bring your DICOM studies or MacBooks along and we will help you with tips and tricks about hardware, software and medical applications.
Basic and advanced users are welcome. We will have some specific giveaways available for all OsiriX/Apple fans.

Also, we will be showcasing OsiriX PRO the FDA-cleared and CE-labeled Class II Medical Device. Come and discuss the benefits of OsiriX PRO.

At ECR 2010 we will provide 4 days of OsiriX Workshops in collaboration with the European Society of Radiology (ESR).

There will be 4 sessions per day addressing basic and advanced OsiriX topics. The courses will be hands-on with Apple Macintosh computers.

The registration and more details will be available at the ECR Homepage soon.

aycan donates again to support the goals and the vision of the OsiriX Foundation. With this support we want to honor the work of Prof. Ratib, Dr. Rosset and Dr. Heuberger.
aycan was the first company who believed in the success of OsiriX since 2005. Since then we donated money and source code for the outstanding OsiriX project. We organized several OsiriX user meetings at RSNA and ECR.

aycan is offering OsiriX PRO as an FDA-cleared and CE-labeled version of OsiriX as medical device class II with support and comprehensive documentation. We are also organizing OsiriX hands-on workshops. In 2009 we held 14 workshops and we are planning the same amount in 2010. The first OsiriX workshop will be held at CT 2010 in Garmisch-Partenkirchen, Germany.
About OsiriX Foundation
The creation of OsiriX Foundation followed several years of unprecedented research and development of an Open Source solution for medical imaging.
OsiriX project started in 2004 in California, USA.
The team returned to Geneva and pursued the development of the OsiriX platform for advanced image processing competing with high-end commercial systems. The international success and wide adoption of this new Open Source platform has lead to new paradigm of software development in the medical community with a trend toward sharing and cooperation in the development of medical software applications.
Driven by their success, the OsiriX team elected to create a Foundation to support and promote the development of Open Source software in medicine.
Weblinks
OsiriX Foundation
CT 2010 MDCT Conference
OsiriX PRO with CE-Label and FDA Clearance
Eingestellt von aycan digital um 09:11 Keine Kommentare: