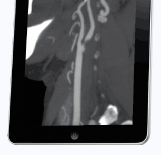 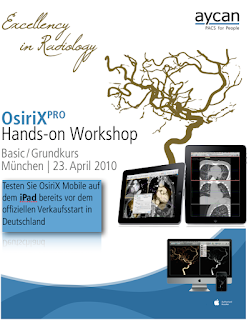 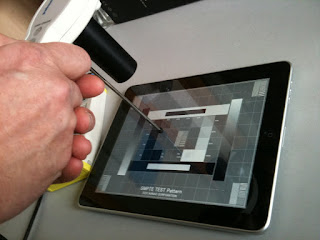 Since Apple released the first iPhone physicians all over the world were thinking about using an iPhone in their business. We at aycan want to put together some information about medical Apps in this post.
At the annual meeting of the RSNA (Radiological Society of Northern America), more than 50k attendees are showing up at Chicago's McCormick Place. It feels like that there are more than 20k iPhones. Many vendors are showcasing iPhone Apps for medical imaging purposes.
There are Apps for:
At RSNA 2010 Asim Choudhri, MD, of Johns Hopkins University in Baltimore reported about a clinical study. he and his colleagues were using OsiriX Mobile on the iPhone to make diagnosis of 125 CT examinations. In 124 cases they had identical diagnosis compared to a medical grade DICOM PACS workstation.
The radiologists identified 25 pelvis and abdomen CT examinations of patients with lower right abdominal pain who had either surgical treatment or follow-up information that they did not suffer from appendicitis.
Next they had 5 radiologists interpret each examination via the App on their iPhones.
The 15 findings of acute appendicitis were identified with more than 99% preciseness, the researchers claimed. Only one diagnose on one examination was incorrect, causing a false negative.
The 10 examinations who did not have acute appendicitis were read correctly on every iPhone reading, resulting in no false positives, the group from Johns Hopkins University said.
Results from the iPhone readers were compared with readings by two gastrointestinal physicians who reviewed the scans at a PACS workstation with medical grade equipment.
The 2 physicians correctly identified all those with appendicitis and all those without appendicitis: their findings were considered the “gold standard” for comparisons in the study.
Radiologists can retrieve a study with 80 images in 1 to 5 minutes on an iPhone, depending on the type of network connection available — WiFi or 3G cellphone services.
Because OsiriX Mobile is not approved by the FDA (Food and Drug Administration) the researchers would not recommend any primary diagnosis be made using the iPhone technology. Rather, the smartphone should be used to decide further diagnostic proceedings, Choudhri said.
The clearance by Food and Drug Administration as a medical device would be needed to use an iPhone for reading medical images. Lately the Food and Drug Administration refused a 510k premarket notification for a similar DICOM viewer App on the iPhone. Mimvista, a Cleveland, Ohio based company tried to apply for the 510k clearance. The Food and Drug Administration stated, that they will need a Premarkt approval for the iPhone DICOM viewer. As it took already 2 years to get this decision, this will take another 2 years for the clinical study to prove the intended use for primary diagnosis.
Maybe the iPad, which is available since this weekend, will be an alternative for mobile image reading. But it seems that the Food and Drug Administration wants to focus on the risks which are coming with mobile devices. The FDA decision might be confusing, because no other 510k clearance of a DICOM viewer is considering the underlyimg hardware. Most DICOM viewer can be used on a laptop, which also is a mobile device.

Physicians seem to have a high demand for a mobile device like the iPhone or iPad. Recently a senior radiologist, working at a big German University hospital,  claimed that many of his referring physicians want to use a mobile device for their work. Taking medical images to the patient or reading images at night-service from anywhere will be the use cases.
In-house they would vote for the iPad, because of the screen size, the low weight and the long-lasting battery (Apple claims > 10h batterytime). iPhone would be a better device for mobile use outside of the hospital.


If you are searching "iphone appendicitis" with google.com, you will get more then 400k results just 4 month after the publication of the Johns Hopkins University lecture at RSNA 2009. This might indicate the level of demand for medical use.
Weblinks:
Demovideo of aycan's xr.ay Teleradiology iPad App
Article about the study "Diagnosis of acute appendicitis on the iPhone"
Interview about FDA denial of Mimvista App
FDA fires warnshot over iPhone